The vast majority of Irish migrants to Newfoundland came from the counties such as Waterford, Wexford, Kilkenny,Tipperary and Cork. No other province of Canada or location in the USA drew such an overwhelming proportion of their immigrants from so geographically compact an area in Ireland and over so prolonged a period of time. 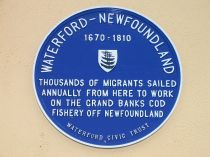 Waterford city was the primary port of embarkation and mid way along its mile long north quay stands the blue plaque (opposite). Most migrants came from within a day’s journey to the city, or its outport of Passage East, 10 km  down river in Waterford Harbour. New Ross and Youghal, Co. Cork were secondary centers of transatlantic embarkation. Old river ports such as Carrick on Suir and Clonmel on the River Suir, Inistioge and Thomastown on the River Nore, and Graiguenamanagh on the River Barrow were important centers of recruitment. So were the rural parishes along these navigable waterways.  Many left Ireland to meet relatives already working at the Grand Banks Cod Fishery, off Newfoundland. aptly named in Irish as Talamh an Éisc.